Tibet is a historical region covering much of the Tibetan Plateau in Central Asia. It is the traditional homeland of the Tibetan people as well as some other ethnic groups such as Monpa, Qiang, and Lhoba peoples and is now also inhabited by considerable numbers of Han Chinese and Hui people. Tibet is the highest region on Earth, with an average elevation of 4,900 metres (16,000 ft).[citation needed] The highest elevation in Tibet is Mount Everest, Earth’s highest mountain, rising 8,848 m (29,029 ft) above sea level.

The Tibetan Empire emerged in the 7th century, but with the fall of the empire the region soon divided into a variety of territories. The bulk of western and central Tibet was often at least nominally unified under a series of Tibetan governments in Lhasa, Shigatse, or nearby locations; these governments were at various times under Mongol and Chinese overlordship. Thus Tibet remained a suzerainty of the Mongol and later Chinese rulers in Nanjing and Beijing, with reasonable autonomy given to the Tibetan leaders.[1] The eastern regions of Kham and Amdo often maintained a more decentralized indigenous political structure, being divided among a number of small principalities and tribal groups, while also often falling more directly under Chinese rule after the Battle of Chamdo. Most of this area was eventually incorporated into the Chinese provinces of Sichuan and Qinghai. The current borders of Tibet were generally established in the 18th century.

These are other trips. 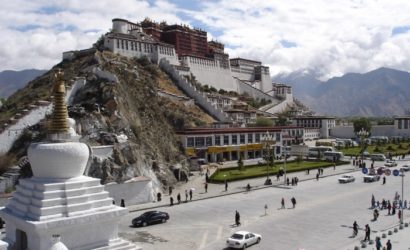