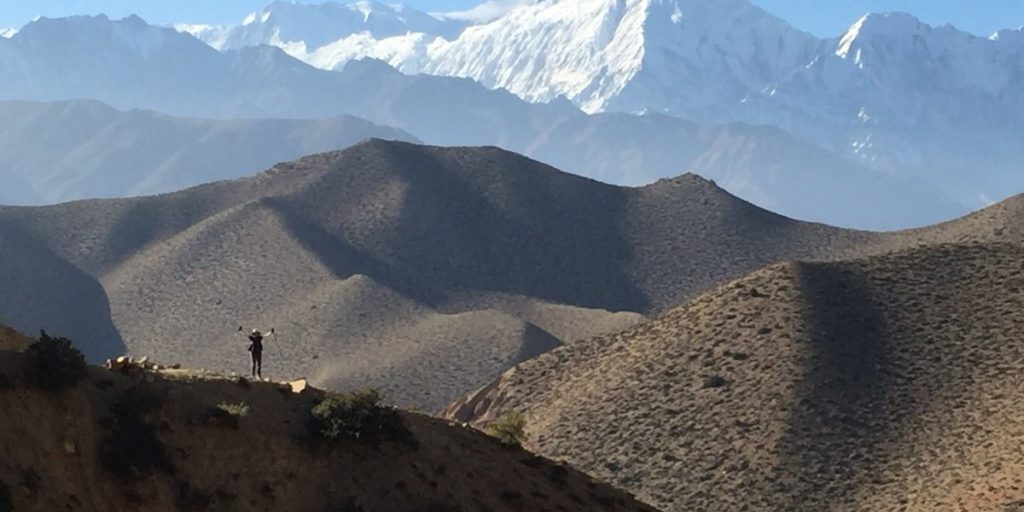 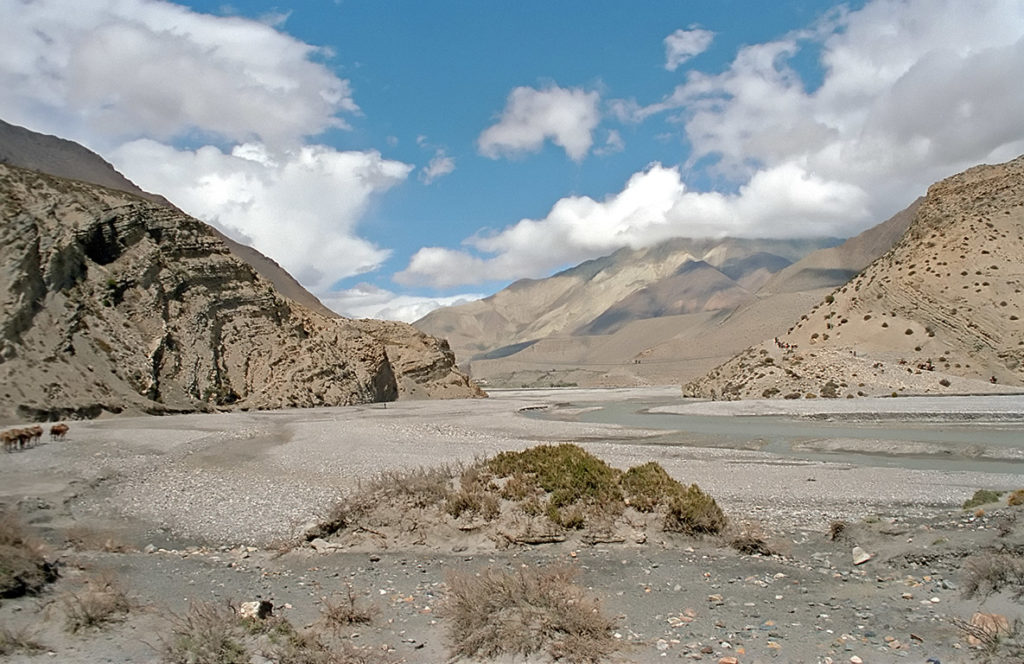 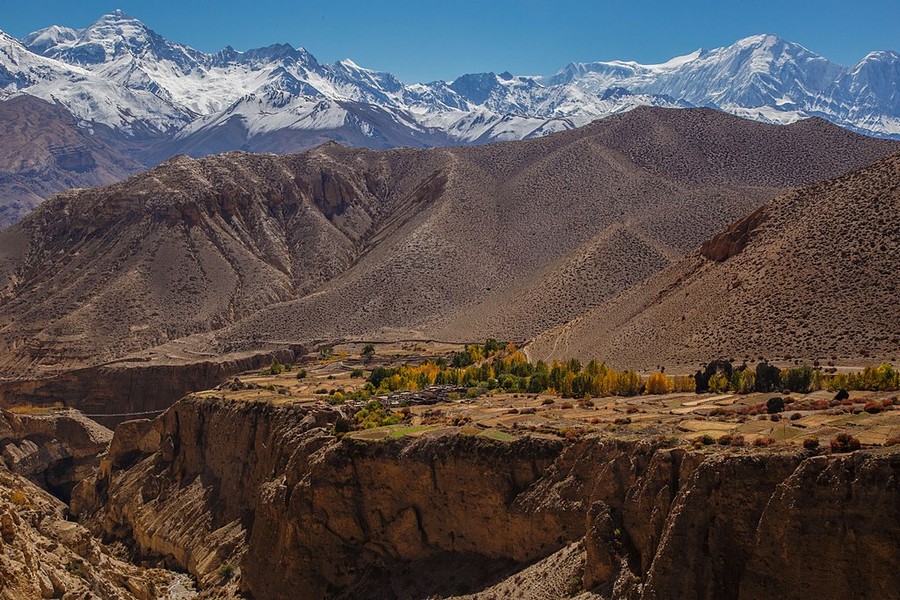 Mustang lies in the northwestern part of Nepal, is home to thriving Buddhist cultures for more than a thousand years. This regal trek takes to this vibrant Buddhist cultural land where you will find ample opportunities to revitalize yourself. This trans-Himalayan region has harsh geographical features but endowed with the magnificent cultural and spiritual landscape. This regal trek along the ancient trail of the Kali Gandaki river valley that once was an important crossroads for trans-Asian trade for centuries, also called a heritage path trodden by great saint and yogi. Along the trail, you will come upon the oases of villages in the midst of barley and buckwheat, and mustard fields reminiscent of early Tibetan medieval civilization you might have seen in some books in somewhere else. As you pass by, you will catch the glimpse of spectacular ancient monasteries and temples majestically stay atop a hillock overlooking each village. Even mysterious is once you enter the restricted area you will be overwhelmed with and marvel at the mystic caves on the face of steep caves along with the deep gorges and ravine beneath the treacherous trail. Finally, the three traditional major towns Ghami, Tsarang, and Lomonthang welcome you after ascending and descending for some time. These towns are obscured in legends and tales associated with the arrival of great saint Padmasambhava and great yogi Ngorchen Kunga Sanpo. Lo Monthang, famous walled town and the capital city of Mustang is the culmination of your journey. Being in the walled town, a religious domain makes you feel as if all your worldly sufferings momentarily comes to a standstill and regain spiritual comfort.
While in villages and in towns, you will have Luigi Fieni and our local tour guides at your disposal. They will enlighten you on the history, culture, and tradition of the region. There are numerous living heritages you will come across in these major towns adorned with exquisite wall paintings, old thanks, and manuscripts in silver and gold. To the north of Lomonthang, you will go on a day trip Tsoshar which you can’t miss, a cave village where monasteries exist in primitive settings. Besides, your tour guide will familiarize you with the rudiments of Tibetan traditional medicines and local art and craft by meeting you with local Amchi and local artisans and craftsmen.
This is the land of mysticism and spirituality blessed by great saint and yogi, and successive religious kings of Mustang. Should you want to see for yourself this spiritual land of Shangri-La, you can join us on this regal journey to the Land of the Last Forbidden Kingdom

Breakfast while in Kathmandu and Pokhara

All meals during the trek (Jomsom to Jomsom)

You will be met by a representative of Mustang adventure trek and transferred to hotel Tibet,Lazimpat. A pre trek briefing will be given in the evening.

Kathmandu Tour and preparation of the permits for the trek. Welcome dinner with Luigi Feini and Tsewang Bista.

This morning we take a flight to Pokhara,in good weather we are greeted with sights of the entire Annapurna range.Pokhara is Nepal’s second largest town.

This morning we take a spectacular flight to Jomsom where we will meet our trekking crew. A half day walk brings us to Kagbeni,an impressive village that is our gateway to Mustang.To pass beyond this point you need a special mustang permit.

We enter Mustang and follow the east bank of the river over a series of small ridges. From Kagbeni we will also be accompanied by our wonderful horseman, who will provide and manage ponies on our trek. Across the river we can see Gang Gompa, a centre of Nyingmapa sect. Approaching Tangbe we encounter the distinctive black, red and white chortens that typify Upper Mustang.The white town surrounded by fields of wheat ,barley and buckwheat,interspersed with small apple orchards.we cross to the east bank of the river and ascend to the village of Chele. Immediately, the strong influence of Tibetan culture of lo is evident with the decoration of the houses.(Overnight basic lodge)

Today you will be passing through a small village called Gyakar with very traditional alleys and houses from early period. You will also be crossing a long suspension bridge that is built on the deepest gorge. Samar is a small town of 14 -15 houses but beautifully located with wonderful views of the mountains. Meals : BLD

You will be witnessing a very special cave monastery dating back to 8th century where it is beleivied that Padmasambhawa ( Guru Rinpoche) actually meditated. The cave monastery is one of its kind in Mustang with many self emanated deities on the wall of the cave. The trail today is little more challenging with lots of ascend and descend.

Today is a short ride to the picturesque village of Dakmar,with its fields of barley and poplar trees. It has one of the most amazing red cliffs. You will also be passing by the longest mani wall ( pray wall) in Mustang before you reach Dakmar village.

Avenues of poplar trees and fields of barley mark our trail before you head out to Lo Gekar monastery, the oldest monastery of the region. This is one of the most powerful monastery that you will witness. Luigi will share his restoration work as he has spent lots of time restoring the wall paintings in this monastery. After visiting this monastery, we will continue to walk to Charang village.On arrival in Charang we will meet Maya Bista,the niece of the last king of Mustang .

Today, you will be trekking in the eastern part of Mustang crossing the Kali Gandaki river. The trail is good for riding the horse and you will have spectacular view of the cliffs and the mountains. Ghara is a very remote village and not many tourist actually stay here. The view from the local lodge that we will stay is just amazing since it is on the hill top.

The trail today is the most challenging one. You start the day with steep ascend and possibility of riding horse on this part of the trail is not possible. So we have another option of taking the horse till Charang and then taking the jeep to Lomanthang. Today is the first day of the Teji festival and the festival starts in the afternoon at around 2 pm only. We should be in Lomanthang by 1 pm and will be witnessing the festival in the afternoon.

Morning – explore Jampa Lhakhang, Thubchen monastery where Luigi have spent more than a decade working on the restoration. Luigi will give an extensive tour of these monasteries.

Afternoon witness the final day of the festival.

Today you will drive back to Jomsom in a private jeep. The journey will take around 8 hours. Lunch will be served in between the journey.

Included in the Cost

Not Included in the Cost